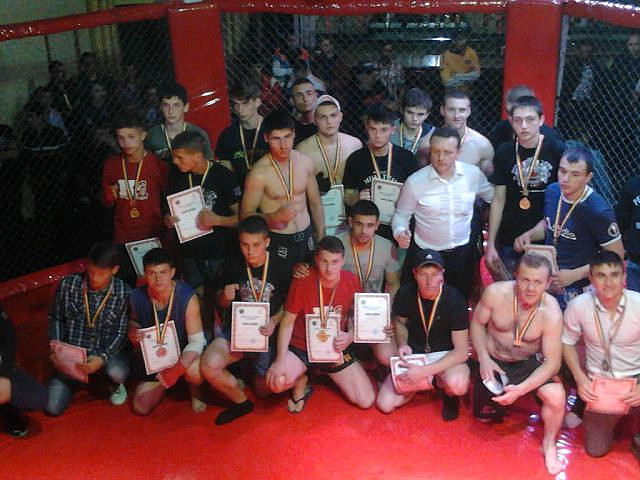 In a tournament format where contestant progression and medal placing is needed, contests and draws cannot be applied. In such instances, if the three rounds of competition [Youth category A only] have resulted in a draw [point deduction] then a fourth period/over time round shall be contested. In the event of a point deduction that results in a score draw in the overtime round then the fighter who committed the foul and had the point deduction shall be eliminated from the tournament, the opponent who did not commit the foul advances. This rule can only be applied to the fourth overtime round.
Only in a tournament format should overtime rounds be contested. At all other times, the Referees evaluation and decision remain final.
19) SCORING TECHNIQUES:
Effective Striking/Grappling shall be considered the first priority of round assessments.
1) Effective Striking/Grappling Legal blows that have an immediate or cumulative impact with the potential to contribute towards the end of the match with the IMMEDIATE
weighing in more heavily than the cumulative impact.
Successful execution of takedowns, submission attempts, reversals and the achievement of advantageous positions that produce immediate or cumulative impact with the potential to contribute to the end of the match weigh more heavily than the cumulative
14 impact. It shall be noted that a successful takedown is not merely a changing of
position, but the establishment of an attack from the use of the takedown.
Submission attempts that cause an opponent to tire and weaken, taking considerable effort to escape shall be given greater weight when scoring than that attempts that are easily defended and escaped without effort. Impactful throws and takedowns are weighed more heavily than athletes who are tripped or bundled to the mat.
This will be the deciding factor in a high majority of decisions when scoring a round.
Scoring:
Under WMMAF Youth competition the referee in charge of the match shall determine the
17
winner of the contest based upon the evaluation and use of the criteria as set out within this document. For Youth, Category A matches contested over 3 rounds the referee shall carry a small notepad and pen kept with the 2 nd official/scorekeeper for notation of scores applied to the round and these are to be made within the one-minute rest period.
The referee, at their sole discretion, can utilize the opinion and consultation of the 2nd official/table judge to deliberate and determine the winning contestant in a close match.
It should be noted that prior to commencement of any youth tournament the criteria and protocol for decision making is to be made known to the contestants and their coaching team. It shall also be strictly and firmly stated that there will be a zero-tolerance policy for demonstration and/or determined un-sportsman-like or aggressive behavior toward any officials as to the decisions made.
This is an amateur sport and in this particular format designed and designated for the youth and ultimately the future of the sport. The behavior that they both witness and employ today shall be the image and portrayal of the sport of mixed martial arts tomorrow and as such a respectful “fair play” attitude is to be expected and encouraged at all times.
The appeals process is not for review of any rendered decision made by a referee. The process is there for any illegal or missed action that could have resulted in a differing outcome of the match. Examples include a missed foul or a submission missed by an official. This procedure shall also be firmly and clearly communicated prior to the commencement of the tournament.